A capacitor bank is a grouping of several identical capacitors interconnected in parallel or in series with one another. These groups of capacitors are typically used to correct or counteract undesirable characteristics, such as power factor lag or phase shifts inherent in alternating current (AC) electrical power supplies. Capacitor banks may also be used in direct current (DC) power supplies to increase stored energy and improve the ripple current capacity of the power supply.

The energy storing characteristic of capacitors is known as capacitance and is expressed or measured by the unit farads. This is usually a known, fixed value for each individual capacitor which allows for considerable flexibility in a wide range of uses such as restricting DC current while allowing AC current to pass, output smoothing in DC power supplies, and in the construction of resonant circuits used in radio tuning. These characteristics also allow capacitors to be used in a group or capacitor bank to absorb and correct AC power supply faults.

The use of a capacitor bank to correct AC power supply anomalies is typically found in heavy industrial environments that feature working loads made up of electric motors and transformers. This type of working load is problematic from a power supply perspective as electric motors and transformers represent inductive loads, which cause a phenomenon known as phase shift or power factor lag in the power supply. The presence of this undesirable phenomenon can cause serious losses in terms of overall system efficiency with an associated increase in the cost of supplying the power. 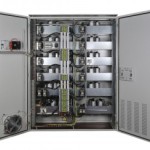 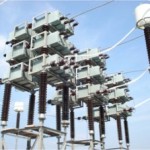